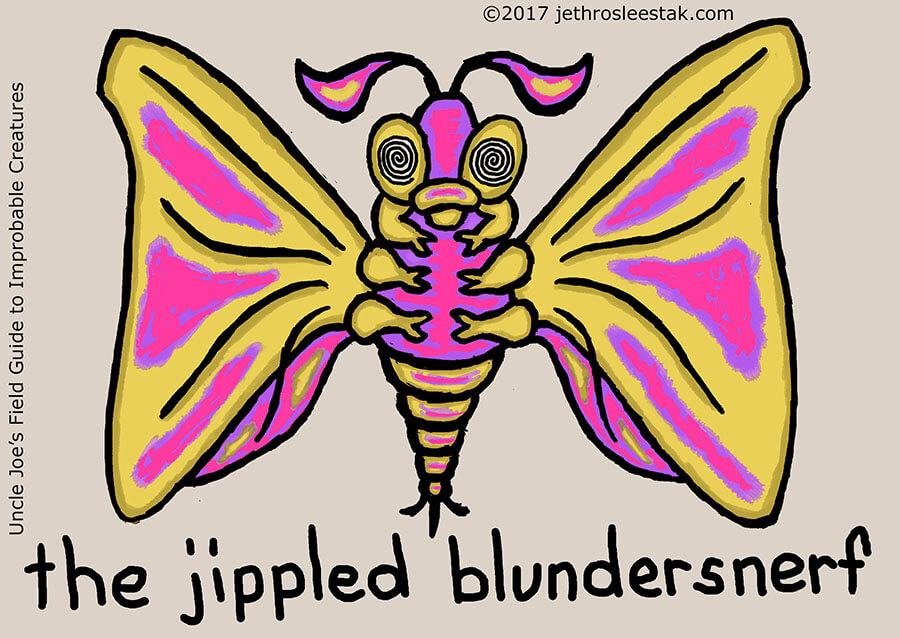 The Jippled Blundersnerf or “Good-God-O-Mighty Moth” is a gnat-sized moth that lives on psilocybin mushrooms and carries concentrated hallucinogenic alkaloids in its bodily fluids. Because the creature is attracted to the moist mucous membranes of mouths and noses, it is often inhaled by cattle, dogs, and humans, who then begin to hallucinate intensely, especially if multiple moths were snorted.

The Blundersnerf swarms on warm summer nights, and this may explain why tent revivals in the deep South back in the day were filled with so much ecstatic singing, shouting, and jumping around.

The Jippled Blundersnerf definitely played a role in the origins of the NogginBones, a fundamentalist sect with many odd beliefs, including the notion that the word “skull” is intrinsically evil and should never be said or written. Other words were taboo as well, and each evil word was replaced with a euphemism peculiar to the Nogginbone sect.

Talking stupid shit like this as much as possible is how a good Nogginbone demonstrates his devotion to the Lord.

The nasal passageways of interpretive dancers.