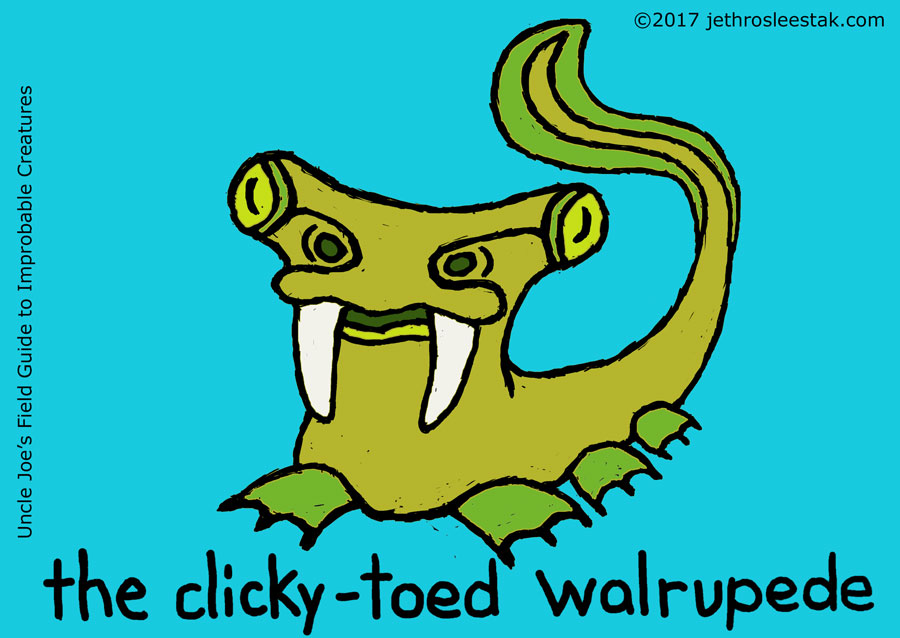 The creature’s genome is mostly newt and centipede and contains only enough walrus DNA for the teeth, which were critical for the distinctive logo and for the marketing tag line: “Let a walrus eat your butt!” Other than that, the Clicky-Toed Walrupede is not too much different from all the other newt hybrids that have escaped from the scavenge-for-hire ecological remediation industry.

Of course, SinoTech’s brand name for the Walrupede “ButtEater 9000” wasn’t nearly as well known as some of the others back in the day. “Newty The Used-Adhesive-Bandage-Gobbling Newt” springs to mind, as does Sanibeast’s “Newt-X” and the cheap Chinese “Newtron Star Creatures” that went for dust bunnies.

Of them all, Newty was probably the most popular of the filth-eating newt hybrids by the time their sale and distribution were banned in North America.

Fortunately for collectors and newt spotters, nearly all these species have escaped and established populations in the wild, where they reproduce rapidly in puddles, old tires, bird baths, and other places where rain water collects for more than a day or two,

In medieval France, a woman could not inherit property or titles unless she swore that her vagina contained no newts and submitted herself nude for inspection by a member of the clergy or a judge or some other patriarchal asshole who claimed God gave him the right to be an oppressive dickhead.

(Fact is stranger than fiction, especially in laws where a women’s body and rights are concerned, and not just in the Middle Ages.)

Your mom’s va-jay-jay. It’s full of newts and shit. That’s why you will never inherit the ducal estates of Burgundy or Orleans.