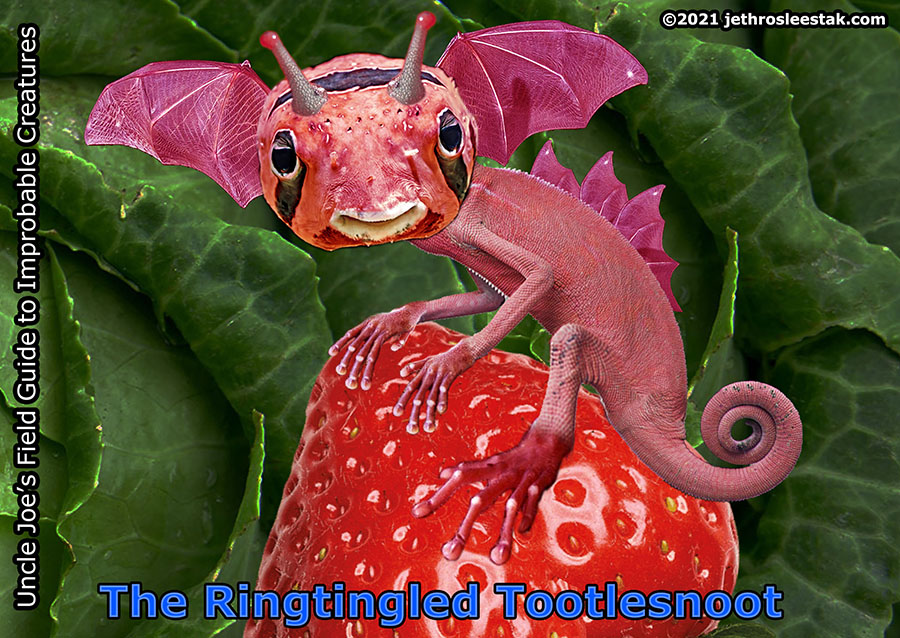 The Ringtingled Tootlesnoot is the number one agricultural pest in all of Latvia but is strangely absent in Sweden, Finland, and the other Baltic republics.

Every summer, the gardens and fields of Latvia are overwhelmed with Tootlesnoot, reaching population densities in excess of several thousand per square meter, but these numbers drop to near zero as you approach the border.

Population densities are highest just outside the genetic engineering facility built by the Soviets in the 1970s about twelve miles south of Riga, but the Russians still insist that it is only coincidence.

The Tootlesnoot genome is usually described as “mostly lemur,” but it actually contains as much DNA from sturgeon and tree frog as it does lemur.

Although the Tootlesnoot did not appear until the mid 1980s, the creature quickly became central to Latvian economics, culture, and religion and is now worshiped by 99% of Latvians and Latvian expats worldwide, with the notable exception of Canadian Latvians, who worship a cinder block they call Jeff the Magnificent. According to what I read on Facebook.

An adult female Tootlesnoot can grow to the size of a salad crouton or small strawberry, but the vast majority of individuals in any population are male and tiny, often not much bigger than a sesame seed.

If you have eaten a fresh garden salad in Latvia, you have ingested many Tootlesnoots. They are said to have a faint taste like almonds, if you can taste them at all -most people can’t- and so the Latvians don’t bother picking them out.

If a Latvian woman says she wants to check your teeth for Tootlesnoots, it means you should ask her family their opinion on the weather and what their favorite color is and if you can have her hand in marriage. Or that’s what it said on Facebook.