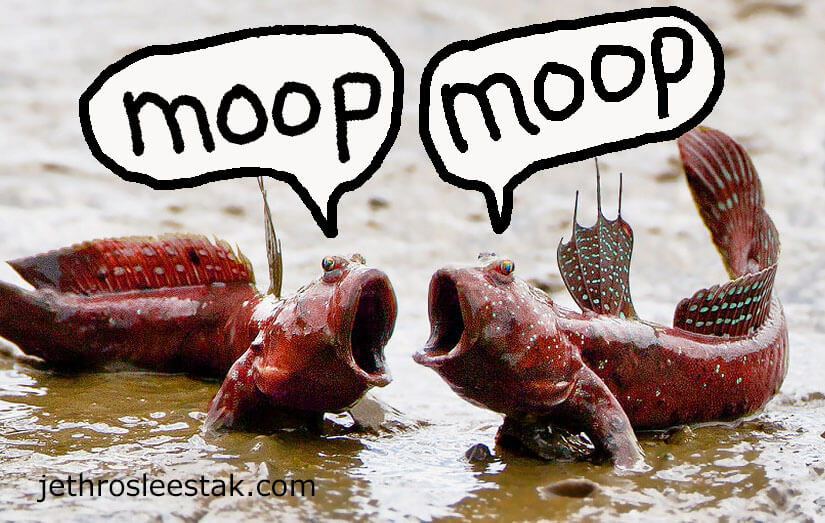 Jethro’s Gift of Prophecy: The Moops and Donald Trump

The LOOORD is what I named my bonktological device. I named it The LOOORD because I noticed I was saying LOOORD when I exhailed after hard tokes.

The LOOORD has revealed to me that I will be reincarnated as a moop, which is an animal on a different planet. A moop is basically a mud skipper but it says “moop” all the time. It also lives on its own filth, at least indirectly. The moop covers the mud flats it lives on with its feces and then leaps up and catches the flies that swarm over all the shit.

The moop is the highest form of life on its planet, which is one big tidal mud flat covered in moops and moop shit, tons of moops, moops everywhere. The only thing a moop does is sleep, catch flies, and have sex. Moops must have sex as often as possible because the conception rate is fantastically low.

A single moop is born once every a thousand years or so, and the leading cause of death is being struck by meteor, which is even less frequent on the Planet of the Moops than on Earth. When populations crash due to geological disasters, both sexes are much more fertile because their hormones are raging from sex deprivation.

I have a pretty big penis for a moop. More importantly, all of my many moop pheromones are exactly the ones female moops prefer. That means I am always the one that female moops choose when given a choice. So basically, the opposite of this life.

But to be fair in describing what life will be like for me, I could be getting laid constantly as a man, and it still wouldn’t compare with how much action I will get as a moop.

My problem on the Planet of the Moops is that I want to make cartoons about how fucked in the head a person would have to be to support Donald Trump. Apparently I am still baffled by that a whole life later. And so I spend my time as a moop drawing pictures of Donald Trump in moop shit and getting pissed when all the sexy lady moops walk through it to get at me.