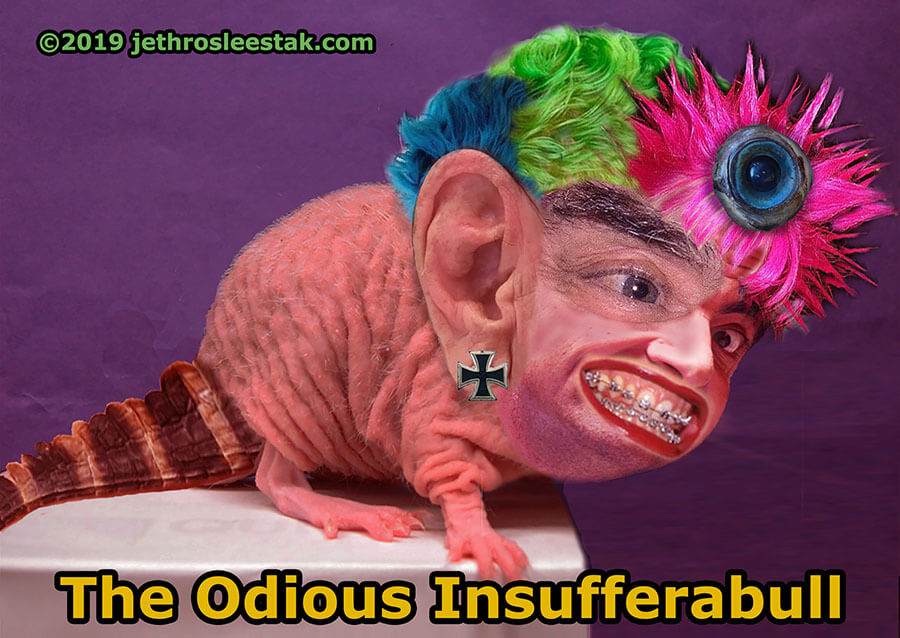 The Odious Insufferabull is the moral authority and expert on everything by virtue of being transgender. And for many other reasons they can tell you about.

In fact, the Insufferabull is filled with an imaginary wisdom that knows no bounds.

Although the Insufferabull has never paid a mortgage or worked a job longer than a month, this creature can mansplain for hours on politics and economic theory, and that is just the start.

No old book or movie you can mention will ever be worth the time according to the Insufferable because it was homophobic or racist or intolerant in some way. Or the author was by modern standards, which is the same difference.

The Insufferabull loves to police conversations going on around them and automatically assumes any reference to race or gender that isn’t an immediate affirmation of victimhood or an appeal to being more sensitive is obviously racist or sexist in some way.

Rest assured, the Insufferabull is fully capable of jumping into the middle of other people’s conversation and doesn’t need to know what they were talking about or the context in order to correct them.

Of course, anyone who doesn’t automatically agree with an Insufferable is just being stupid or ist in some way.

Endlessly fascinating, at least in a morbid way, the Insufferabull is a creature of ironic contradictions:

For example, the Insufferabull thinks nothing of using terms like “mansplaining” and “white girl” in their monologues about how sexist and racist language are unacceptable.

And of course the Insufferable is the only white person who can use the N word. It’s just one of the many privileges that being the most sensitive person on the planet entitles you to.

The Insufferabull routinely uses the stress and abuse of being transgender as an excuse from physical activities and normal responsibilities, yet they go out of their way to initiate confrontations with complete strangers on a daily basis.

For example, if you are driving a car full of people home after a night out, and the cops pull you over, the Insufferabull sitting in the backseat will be the one to say something smart or confrontational to the cop. It will not matter to the Insufferabull how terrified the driver and other people in the car might be.

In the lab, evolutionary biologists have observed that the Insufferabull will wither and die if deprived of a sense of being persecuted by everyone, and they theorize that is why this species perfected the art of being disliked on short notice.

The Insufferabull is always starring in their own private movie.

Although the Insufferabull has the generic blue or pink dyed hair and wears the generic slacker-goth outfit that is seen all the time where the creature lives, they take great pride in discussing how freaked out all the cis-male bullies are by their “radical” appearance.

And the Insufferabull is constantly being hit on. Any person who speaks to an Insufferable casually is hitting on them. Any man, woman, or child who offers a throw-away compliment is definitely guilty of sexually harassing the creature.

Unfortunately, two Insufferabulls cannot be in the same room without eventually having a friendship-ending argument over some trivial point of political opinion. Upon meeting, two Insufferables start out by having the standard agreement-fest concerning their shared progressive opinions, but the longer it takes for the explosion to finally happen, the bigger and more vicious it is.

The Insufferabull ALWAYS has to establish the fact that they are the most progressive person in the room, and they love to play games of “gotcha” with the latest version of some politically-correct term, especially with the elderly, busy waiters, or whoever is unfortunate enough to stumble into their path.

The Insufferabull rails constantly about white privilege in their monologues yet insists on having every benefit of being white and privileged. The Insufferabull cannot tolerate temperatures above 65 degrees and whines if you ask them to walk anywhere, even short distances.

Of course, the Insufferabull eats an expensive diet and is wasteful with food and is overweight and is in terrible physical shape, but cis-male culture is what is killing the planet. Just ask the Insufferable if you have any doubts.

Warning: Any attempt to call the Insufferabull on their bullshit is a homophobic and racist attack on the entire transgender community. Or Liberals. Or Progressives. Or any group the Insufferabull feels entitled to speak for as a whole.

The above is true even if you remove the wannabe Nazi’s tiki torches, which is the real source of their power, at least as a last-minute bad idea for a Halloween costume.

Your workplace, your extended family’s holiday meal, your girlfriend’s circle of friends, someplace you can’t avoid. You were obviously an asshole in your previous life.