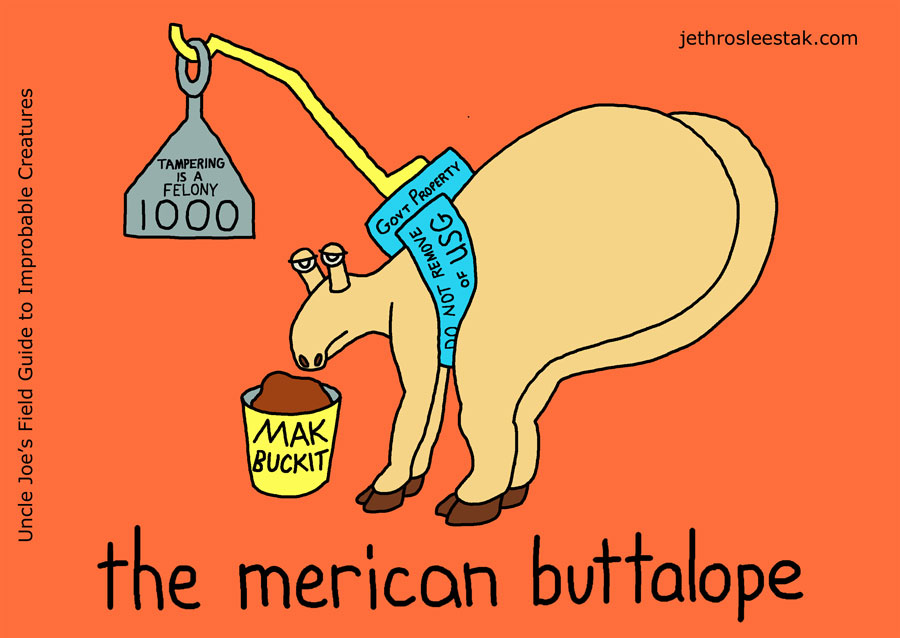 Normalize morbid obesity now! I would rather my children have a lifetime of compromised health than ever have a teacher or coach reprimand my child for overeating and sitting around constantly. There is nothing worse than childhood shame, no not even the inevitable consequences of obesity, not diabetes, not herniated disks, not cancer, not a lifetime of missed opportunities, nothing. And do you know why? When you make my child uncomfortable, you are also calling me out on my shit parenting, and that is unacceptable.

The Merican Buttalope was genetically engineered to control rat populations by eating all the scraps of fast food littering roadways and public spaces, but it turned out to be an environmental policy disaster for the US.

For starters, rats are much quicker than Buttalope and can always get to scattered food waste first, and so the Buttalope barely dented rat populations except right at overflowing trash cans. On top of that, the Buttalope required all sorts of expensive maintenance and care. Their constant overeating of unhealthy crap food created all sorts of unexpected health problems and disabilities.

The Buttalope ate so much that eventually their backsides grew so huge that counterweights had to be installed to prevent the creatures from rolling over backward, and there was intense debate in Congress over what a sustainable long-term solution would be.

Liberals successfully overrode Conservative opposition to pass what became known as the MackBuckit Act, which mandated federally-funded roadside feeding of Buttalope. It was an easy victory. By that time, at least 50% of Americans were morbidly obese, and so the public was overwhelmingly sympathetic to the animal and its needs.

For their own part in the travesty, Conservatives failed to defund Buttalope breeding programs because of their own addiction to pork-barrel spending. Thousands of newly-commissioned military cargo planes were used to shower public lands with chicken bones and half-eaten hamburgers saturated in mayonnaise.

By the year 2100, over 40% of the US’s Gross Domestic Product was spent on counterweights for Buttalope and most of the rest was spent on feeding them and trying to cope with their weight-induced medical conditions.

The US was on the verge of financial collapse when President Bob successfully forced the EU to help foot the bill, which he would have been incapable of doing had he stepped down as CEO of Megalomart as the Liberals wanted him to do upon inauguration.

That is where President Bob’s most famous quote comes from: “I see no conflict of interest. We are Megalomart. Megalomart is us.” Great words from a great man. President Bob.

Everywhere in the US with higher concentrations along roadways near fast food restaurants, Megalomart on a Saturday.